Design evaluation of a cyclone separator was carried out. The objective was to evaluate the efficiency of a cyclone separator design in separating particles of different sizes and densities from a stream of turbulent particle-laden airflow.
Particles were tracked using the Lagrangian approach with drag force computed using correlation by Morsi and Alexander (1972). The effect of turbulence on particle trajectories was accounted using the Discrete Random Walk model. Due to the lean concentration of particles in the inlet air stream, one-way coupling was considered, i.e. the influence of particles on the airflow was neglected.
The airflow profiles showed evidence of slight precessing of the vortex core. Trajectories of the particles are significantly influenced by particle diameter and less influenced by its density for the range of particle densities investigated. 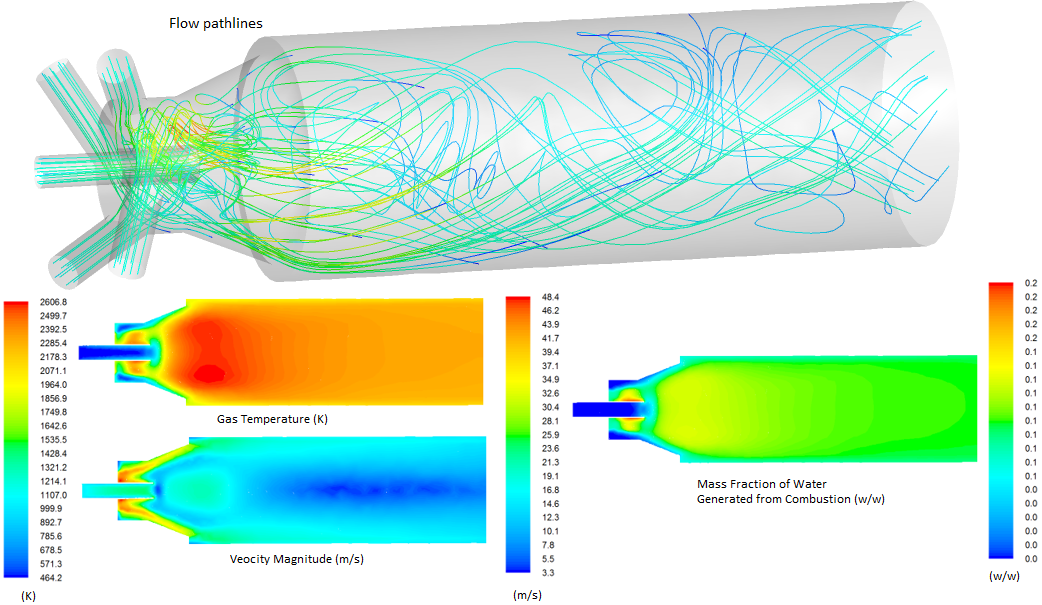 Modelling of a Non-Premixed Burner

Performance of a non-premixed burner design was evaluated. It comprises four inlet air streams with centrally injected fuel stream comprising 25% methane and 75% hydrogen.
CFD modelling approach consisted of Reynold Stress Transport model for turbulence with P1 radiation model for considering radiation heat transfer and transient flow condition. Mixing of air and fuel streams and combustion characteristics in the chamber were analysed. Flame instability was predicted in the existing design leading to high NOx emissions. Changes were proposed in the design to improve the burner performance. This work resulted in improved burner performance which was not feasible with physical prototype testing due to cost and time constraints resulting in significant savings in time and costs.